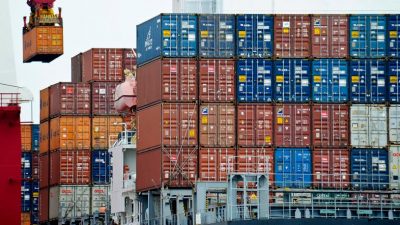 The World Trade Organization (WTO) slashed its growth forecast for global trade this year by more than half on Tuesday, citing heightened uncertainty due to trade tensions and a slowing global economy.
The WTO now expects global merchandise trade volumes to grow by 1.2 percent in 2019, versus its earlier estimate of 2.6 percent in April. “The darkening outlook for trade is discouraging but not unexpected. Beyond their direct effects, trade conflicts heighten uncertainty, which is leading some businesses to delay the productivity-enhancing investments that are essential to raising living standards,” WTO Director-General Roberto Azevedo said in a statement.
For 2020, growth is seen to be 2.7 percent, down from an earlier forecast of 3.0 percent. The organization in 2018 had forecast growth at 3.0 percent.
Meanwhile, Azevedo added that job creation could also be impacted as global firms may be forced to employ fewer workers needed to produce goods and services for exports.

The WTO’s lowered forecast reflects slower global economic growth due to Brexit-related uncertainty in the European Union, shifting monetary policy stance in developed economies, and rising trade tensions.
The Geneva-based organization also gave an estimated growth rate of 0.5 percent to 1.6 percent for world trade growth this year.
“Trade growth could fall below this range if trade tensions continue to build, or outperform it if they start to recede. The range of likely values is wider for 2020, ranging from 1.7 percent to 3.7 percent, with better outcomes depending on an easing of trade tensions,” the WTO said.
“Further rounds of tariffs and retaliation could produce a destructive cycle of recrimination,” the organization added.
Meanwhile, the WTO added that North America recorded the fastest import growth of any single region at 1.8 percent, followed by Europe at 0.2 percent.
The two regions that witnessed declines included South America, down 0.7 percent, and Asia, lower by 0.4 percent.
“Collectively, the imports of other regions grew faster than those of North America, at 2.4 percent. Import demand has been particularly weak in Asia, weighing heavily on exporters of manufactured goods (e.g. Japan, Korea, and Germany),” the statement said.

The US and China have been caught in a 15-month trade war, with both nations imposing tariffs on hundreds of billions of dollars of each other’s goods.
The escalating trade dispute between the world’s two largest economies has also taken a toll on global stock prices and threatened global economic growth.

China’s top trade negotiator, however, is expected to lead an upcoming 13th round of talks sometime this month with hopes to resolve the trade war with the US, according to a report from the Associated Press.