Stocks struggle for momentum on inflation and taxation fears 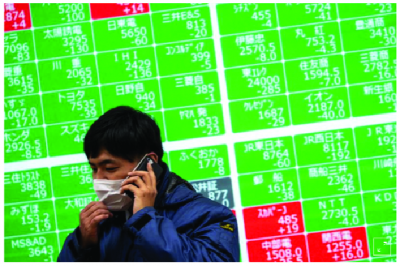 Reuters : World stocks started the week on the backfoot on Monday, slipping to 2-1/2 week lows on further signs of accelerating inflation as well as tax and regulatory pressures on the world’s biggest companies.
Equity markets are down so far in September after a seven-month winning streak, pressured by inflation which may prove less transitory than flagged by central bankers, persistent and signs that governments are keen to get more tax from companies and to make them toe a stricter regulatory line.

The latest source of worry is a Financial Times report that Beijing is aiming to break up Alipay, the payments app owned by Jack Ma’s Ant Group (688688.SS). read more
The report, which pushed the Chinese blue-chip index (.CSI300) 0.5% lower, shows there may be no let-up in the regulatory clobbering Chinese firms have received this year.
We will see more of the state finding ways to extract funding from those it deems most capable of providing it, said Tom O’Hara, portfolio manager at Janus Henderson.

Adding to concerns is the continued acceleration in inflation, with Japan reporting wholesale prices at 13-year highs last month. That comes on top of data showing factory gate inflation at more than decade-highs in the United States and China, pressuring firms to pass on price rises to consumers.

The market has been looking through inflation levels, assuming they are transitory and that interest rates won’t go up much but the conundrum is that wherever we look, we see inflation, whether on supermarket shelves or at the petrol pump, O’Hara added. We will probably see more inflation and interest rate rises than people think.
A market gauge of euro zone inflation expectations rose to its highest since mid-2015 on Monday in a further sign that investor perceptions over the direction of future inflation is shifting .

Investors will pay attention to upcoming Chinese data on retail sales and industrial output which could show a further slowdown in the world’s second-biggest economy.
U.S. consumer prices, due on Wednesday, are also seen easing a touch, albeit to a still-high 4.2%, while the spread of the Delta COVID variant may have softened retail sales.
Banks continue to flag caution. A Deutsche Bank survey found market players expect a 5-10% equity market correction by year-end, with COVID and inflation seen as the main risks.

BNP Paribas, while expecting the S&P 500 to stay unchanged by end-2021, highlighted risks from higher yields and taxes, at a time when earnings momentum has slowed from excellent to good. They also lowered estimates for emerging markets, stemming from Chinese policy risks.
Treasury 10-year yields, currently at 1.33%, posted their third weekly gain last week, the longest streak since mid-March and tension will likely build before the Sept. 21-22 U.S. Federal Reserve meeting. .
The general air of risk aversion helped lift the dollar index to 92.80 , up 0.24% and off recent lows of 91.941.
Oil prices were at one-week highs above $73 a barrel due to shuttered output in the United States, the world’s biggest producer, following damage from Hurricane Ida .