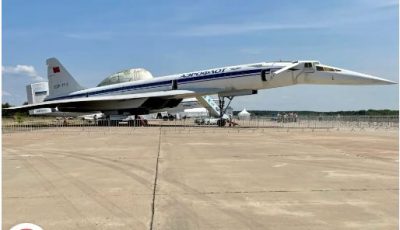 Simple Flying: The Tupolev TU-144 conducted its first flight over five decades ago. However, I had the opportunity to step on the Soviet Union’s supersonic passenger airliner just last month. Here is a first-hand look inside this historic jet.
Where it all started
The TU-144 conducted its first flight on December 31st, 1968, which was notably two months before the legendary Concorde. It departed Zhukovsky Airport to make history that day, which was the location where I toured inside a unit of the type – 53 years later!
Only 16 units of the Tu-144 were produced by the Voronezh Aircraft Production Association in Voronezh. After covering many articles related to Soviet Union aviation in the months leading up to my trip to the MAKS-2021 airshow in Moscow Oblast, I was so excited to see this aircraft.
The Tupolev Design Bureau was behind this aircraft. While Andrei helped to get the Soviet commercial aviation industry off the ground, his son, Aleksey, was also integral when it came to jet operations. The group was behind other famous builds such as the Tu-104, which was the second jetliner to enter commercial service.
Across the cabin
It would take seven years for the Tu-144 to enter service after its first flight. The plane was introduced with Aeroflot on December 26th, 1975, to handle mail operations after years of challenges with the launch.
There was a lot of space throughout the cabin. Nonetheless, I tried to envision how it would be during passenger service with more seats, people, and equipment. One thing that was evident was the abundance of legroom.
A short-lived program
An infamous crash at the 1973 Paris Air Show, which saw the aircraft break up above 200,000 spectators set the tone for what was to come. After entering passenger service in 1977, a crash that followed the year after caused Aeroflot to ground the type after only 55 passenger flights.
The aircraft’s four Kuznetsov turbofan engines and air conditioning units caused a lot of noise disturbance on board. This air conditioning was critical as it prevented overheating amid the high friction.
Leaving a legacy
Aeroflot was the sole commercial operator of the type, with only the Soviet Union’s ministry of aviation and NASA being the other two entities to hold units. Interestingly, the latter worked with the aircraft’s manufacturers to develop a new variant – the Tu-144LL. The project resulted in the Supersonic Flying Laboratory, which played an important part in a joint research program between the United States and Russia.
So, even though the Tu-144 represents a period of intense competition between Russia and the West, in its latter years, it had a crucial role in a new era of cooling in the global political sphere.
I felt privileged to be able to witness such an aircraft firsthand. This is a factor that may not have been possible if I was around during the plane’s heyday. Nonetheless, it truly felt like I was going back in time when walking through the cabin of the plane in Moscow that day.
Russia’s United Aircraft Corporation (UAC) is working on a new supersonic passenger solution. With it being around half a century since the Tu-144 first took flight, the entire production will be worlds apart from what we have witnessed with the original.
What are your thoughts about the Tupolev Tu-144? What do you make of the history of the plane? Let us know what you think of the aircraft and its cabin in the comment section.