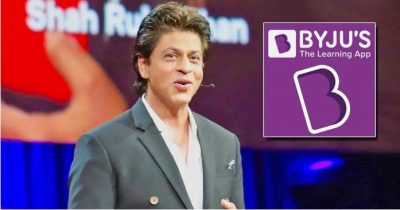 Koimoi.com : SRK has called off his upcoming projects to be with his family in Mumbai, and recently BYJU’S took the hard decision to pause their association with the superstar.
Shah Rukh Khan has been making headlines for all the wrong reasons after his son Aryan Khan was arrested from a cruise ship for the consumption of illegal substances. Although heÕs facing the toughest time of his life, fans are showing their full support. Meanwhile, SRK has called off his upcoming projects to be with his family in Mumbai, and recently BYJUÕS took the hard decision to pause their association with the superstar.
The move comes after the tech giant faced multiple backlash from netizens since NCB conducted a raid on the luxury cruise and arrested King Khan’s son along with seven others. Some social media users claimed that endorsing an education app by someone who can’t teach his own child to act lawfully will impact their image badly.
Although BYJU’S official spokesperson declined to comment on this matter, but another person involved told Economic Times, `They have paused all SRK-related promotions for now. It had to be pulled as the company which is in the area of education wouldn’t like to be seen in promotions with him given the controversy (over the drug case involving his son) These ads were booked in advance—as is the process—so it took some time to stop all of them.’
BYJUS had also planned a new ad campaign with Shah Rukh Khan just a few weeks back and they were also planning for IPL ads too, another person involved adds, `For Byju’s, they had planned for IPL ads too and now there is a discomfort around that as the tournament moves to its next stage. ItÕs not clear if they will be able to pull out of all IPL promotions,’ another person aware of the matter said.’
Apart from the educational tech company, SRK is also the face of big brands like Hyundai, LG, Dubai Tourism, ICICI Bank, Reliance Jio. Reportedly, the education company has the biggest sponsorship deal with the superstar, he was paid nearly Rs 3-4 crore per year for the endorsement.
Meanwhile, Tata Group is also maintaining silence on the matter, on the other hand, Rohit Ohri, group chairman at creative ad agency FCB India shared that pausing Shah Rukh Khan’s association will affect BYJU’S in a bad way.
`BYJU’S has benefited immensely from its association with SRK. Shah Rukh’s association with the edtech brand has been so intrinsic and so deep, that even if BYJU’S is pausing the advertising for now, it will be very difficult for the brand to delink itself from SRK.’
As of now, the magistrate has ruled out Aryan Khan’s bail plea and said, `Have heard the applications and the submissions. The applications are not maintainable before us and hence rejected.’